Thor can trace its roots back to 1910 when The Birmingham Belting Co Ltd was founded in Snow Hill, Birmingham, by the Stephens family.

Birmingham Belting manufactured flexible drive belts for the Cotton Mills and other industrial applications that were thriving around this time.

They also however had a small section within the company manufacturing Rawhide Hammers and Mallets.

Some 13 years later due to growth it was decided set up a separate company and Thor Hammer Company Limited was incorporated specifically for the production of hammers and mallets.

The company was named after the ancient Norse God of Thunder who owned the most miraculous of hammers, Mjӧlnir, a throwing hammer, which always sped directly to its mark, slew the giant then rebounded straight back to Thor’s hand.

Thor in its present form was fully established in 1935 when one of the Stephens family, Walter R Stephens decided to move the hammer and mallet manufacturing to separate premises in Salop Street, Birmingham.

The separation from Stephens Belting meant that Walter could concentrate all his efforts on further developing the company and within a year new products were being designed and launched.

One of the most popular items launched around this time was a Copper Hide hammer which had an Iron head fitted with a Copper Face at one end and Hide Face at the other.

A local car manufacturer was so impressed with the product that they supplied a Copper Hide hammer in the toolkit with each car they made.

The hammer was used to tighten and loosen the central wheel nuts or ‘Spinners’ used to secure the wire spoke wheels fitted to most cars at this time.

The car company was S S Cars now known as Jaguar and this type of hammer remains our biggest selling range to this very day. 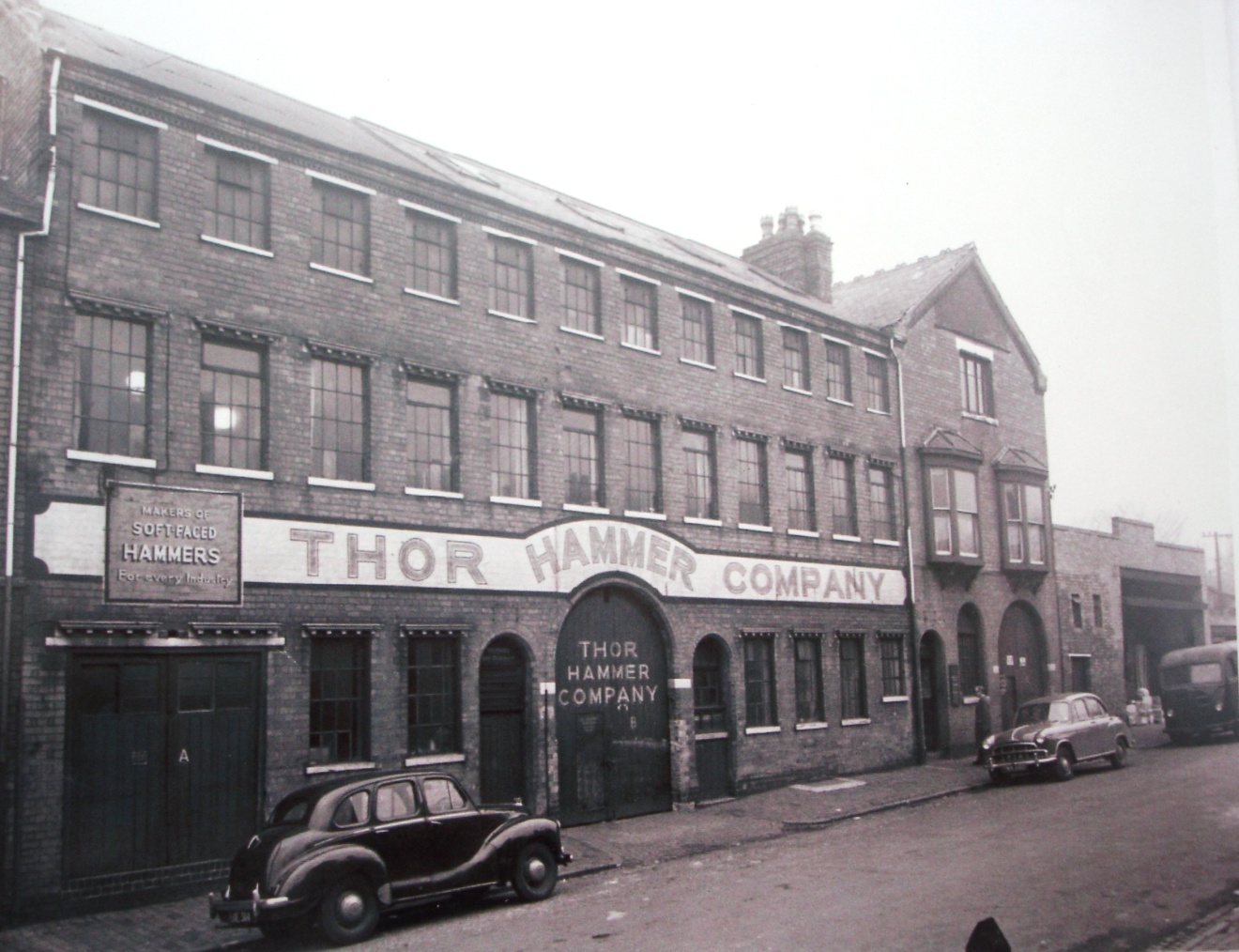 During the war years there was a huge demand from the British government for Thor’s product which was used in particular for constructing temporary bridges (Bailey bridges) and for repairing Tanks and other military equipment on or around the battlefield.

Due to the design of the hammers engineers could construct bridges and carry out repairs quickly, safely and most importantly in almost total silence.

Engineers from all four corners of the World began to appreciate the benefits of Thor hammers and consequently continued to use our product after the war.

The late 1940’s saw the introduction of new materials including plastics and it wasn’t long before Thor designed and developed a plastic hammer with faces that once worn, could be replaced by hand.

Around this time Thor exhibited at the British Industries Fair, Castle Bromwich, Birmingham.

The exhibition attracted visitors from all around the world and export orders for Thor product soon followed.

During 1957 the company moved to its present location in Highlands Road, Shirley on the outskirts of Birmingham.

The move gave Thor the potential to continue to expand its manufacturing facilities and since then several new manufacturing bays have been added.

The Thor product range continued to grow at a rapid rate and during the 60’s Thorex Nylon range of hammers was introduced.

During the same period Thor began exhibiting at the International Hardware Exhibition in Cologne Germany.

Export orders continued to grow and now accounted for 12.1/2% of turnover.

In 1966 Walter became chairman of the company and his son Michael Stephens was made Managing Director.

The development of the Thor range continued with the introduction of the Thorace Dead Blow range.

Thor now sell to 50+ countries worldwide with export accounting for 40% of turnover.

We now export to over 80 countries and we continue to exhibit at the Cologne Hardware exhibition in Germany.

We still manufacture some of the original hammers and mallets the company started making back in the early 1900’s.

Whilst most are produced using modern machinery and modern manufacturing techniques some products, in particular hide mallets and faces, are basically produced from the same raw material in the same way using the same techniques the original workers used when the company was founded back in the early 1900’s.